The NTD Report for the All-Party Parliamentary Group on Malaria and Neglected Tropical Diseases was launched on 6th November.

The report was launched by the Lords' Speaker Baroness D'Souza, Baroness Northover, Government Spokesman in the House of Lords on International Development and Government Whip and Dr Lorenzo Savioli,  Director, Department of Control of Neglected Tropical Diseases, World Health Organization.

The report charts the progress of NTDs through 2012 reflecting on highlights such as the UK Government’s commitment to provide funding of £240 million to NTDs over 4 years and the London Declaration on Neglected Tropical Diseases which united pharmaceutical companies, donors, endemic countries and non-government organisations in their fight against NTDs.

The full report is available to download here
Posted by Helen Hamilton at 15:00

The seventh meeting of the Global Alliance to Eliminate Lymphatic Filariasis will take place in 18th-19th November in Washington. For more information go to filariasis.org

Over the past year, WaterAid has increasingly engaged in initiatives for the control and prevention of NTDs. Among other activities, WaterAid has joined the UKCNTD, attended the meeting of the Global Alliance for Elimination of Trachoma by 2020 in Washington DC, and is part of a consortium led by Sightsavers and ITI for trachoma mapping.

In early September, WaterAid Australia joined the meeting of the NTD NGDO Network in Sydney , during which it lead a plenary session on water, sanitation and hygiene (WASH) and NTDs. The session included presentations on the links between WASH and NTDs, an overview of the role of WASH in NTD control strategies, and examples of co-implementation of WASH and NTD programmes, as well as key supply and demand approaches for sanitation and hygiene. The session provided an opportunity to discuss the necessary steps to deepen and scale up collaboration between WASH and NTD actors for successful and sustainable elimination of WASH-related NTDs.
Posted by Helen Hamilton at 17:00

Additional details including registration regarding all the above will be posted as soon as available.
Posted by Helen Hamilton at 12:28

A 2011 investigation shows that after five years of implementation of the SAFE strategy for trachoma con­trol, the prevalence of intestinal parasites in children ages 2–15 years has decreased in 10 woredas (districts) of South Gondor, Ethiopia. The SAFE strategy refers to surgery, antibiotics (Zithromax, donated by Pfizer), facial cleanliness, and envi­ronmental improvement. Distribution of albendazole also may have played a role in the decline. In addition, the frequency of protozoan infections warrants an investiga­tion of water quality.

﻿ ﻿﻿﻿﻿﻿
﻿﻿﻿﻿﻿﻿A total of 2,338 stool specimens were collected from randomly selected children in 99 communities. (All selected children were offered deworming treat­ment regardless of participation.) The specimens were processed and linked to survey data from a total of 2,657 children (88 percent response). The mean age of children providing specimens was 6.8 years (SD 3.6), and 46.8 percent of the specimens were from boys. The zonal-level prevalence of roundworm (Ascaris), hookworm, whip worm (Trichuris), and any of these three infec­tions was 10.6 percent, 9.8 percent, 2.5 percent, and 20.1 percent, respectively.

The prevalence of intestinal schisto­somiasis was 2.0 percent, but the propor­tion of children infected with schistoso­miasis by community ranged from 0–52.4 percent. Intense helminth infections (≥100 eggs per gram) were observed for roundworm only (16.4 percent of infec­tions) and no other helminth infection. The prevalence of infection with any protozoan was 78.1 percent, and 23.0 percent of children had Giardia cysts in their stool. 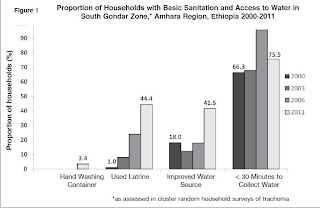 Figure 1 shows the improvements in household-level sanitation and water access that have occurred in South Gondar zone since 2000 prior to any SAFE interventions. SAFE interventions were piloted in a few areas until 2003, and by 2006 the implementation of SAFE activities was at scale in all woredas within the zone. Cumulatively, 339,913 household latrines have been constructed, increasing household ownership from 1 percent to 44.4 percent.

Prevalence of worm infections has reduced significantly since a previous survey in 1995 (see Figure 2). While the proportion of children infected with hookworm was not significantly lower than in 1995, none of the current infec­tions were intense. Ascaris and trichuris are transmitted through the fecal-oral pathway, which is affected by the pres­ence of hygiene and sanitation, whereas hookworm is transmitted percutaneously through the feet. In rural Ethiopia, chil­dren are often barefoot, making them more susceptible to this type of infection. A total of 945,991 doses of mebendazole or albendazole were distributed within the zone to preschool-age children in 2005–2011, yet the proportion of this target population that reported taking this medicine was 33.0 percent (24.4–41.5 percent). 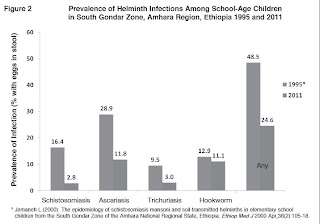 Improvements in sanitation and perhaps recent albendazole distribution among preschool-age children have played a role in the observed decline in intestinal helminthiasis. In addition to continued promotion of hygiene and household-level sanitation through the SAFE strategy, expansion of the cur­rent deworming program to school-age children should be considered accord­ing to guidelines of the World Health Organization. The frequency of protozoan infections suggests poor water quality or unsanitary water collection and storage practices, calling for further study.

The Carter Center assists the Amhara National Regional State Health Bureau to eliminate blinding trachoma through the implementation of the SAFE strategy (surgery, antibiotics, facial cleanliness, and environmental improve­ment). The aim of the F component is to reduce contamination of fingers, flies, and fomites by keeping faces free of infectious discharge. The promotion of facial hygiene involves face and hand washing to prevent transmission of C. trachomatis, which also prevents transmission of other infections spread by contact with infec­tious material. The E component aims to improve access to water and sanitation and encourages water use for hygiene purposes. The combined effects of the F and E aspects of SAFE should have an indirect benefit on intestinal parasites, respiratory tract infections, and diarrheal diseases.

Article originally appeared in the August 2012 issue of Eye of the Eagle, a biannual newsletter published by The Carter Center.


The WHO’s Weekly Epidemiological Record published on 24th August 2012 reports the total number of new cases of leprosy detected in 2011 as almost 220,000.

18 countries reported ≥1000 new cases contributing 94% of the new cases detected
globally in 2011. While this is a decline of 9,500 on the figure for 2010 it should be noted that Ethiopia, Nigeria and Tanzania have not reported this year and have between them regularly reported around ten thousand new cases annually in recent years.
﻿﻿ ﻿﻿

ILEP General Secretary, Doug Soutar notes,
“Over 16 million people have been treated since the introduction of multi drug therapy in the early 1980s but the continuing detection of over 200 thousand new cases of leprosy annually together with the disabling consequences of this neglected disease, require us to strengthen and maintain our efforts to ensure effective and sustainable leprosy control in all endemic countries”.

Uniting against NTDs to change lives for bottom billion

The Bill & Melinda Gates Foundation and the UK Coalition against NTDs will host a meeting of influential international organisations and government representatives today (30 January) to discuss increased commitments to improve the lives of more than one billion people affected by a group of diseases known as neglected tropical diseases (NTDs). These diseases devastate the lives of some of the poorest and most vulnerable people in the world, together causing death, severe disability and stigma, resulting in billions of dollars of lost productivity.

The World Health Organization will present its roadmap for controlling, eliminating and eradicating NTDs. It outlines targets for addressing the health needs of the poverty-stricken communities affected by NTDs. All participating organisations share the common goal of working together in an innovative, flexible and cost efficient way to reach key milestones. These include wiping out Guinea worm disease by 2015, the global elimination of blinding trachoma and lymphatic filariasis by 2020, and the elimination of schistosomiasis and onchocerciasis in many African countries. The organisations attending are expected to demonstrate their shared commitment by endorsing the London Declaration on NTDs which will lay out the additional necessary resources and streamlined approaches needed to meet the WHO’s goals.

The UK Coalition against NTDs, a partnership between UK-based international organisations engaged in combating these diseases, and the Bill & Melinda Gates Foundation will co-host an afternoon discussion on this topic. Utilising the on-the-ground experience of its members, the coalition forms a key part of the in-depth session which looks at how new and better partnerships can help accelerate improvements in health and development for those living in the world’s poorest countries. It is essential that partners across, different sectors including health, education, water and sanitation and veterinary public health work collaboratively so that elimination can become a reality.

Caroline Harper, spokesperson for the UK NTD Coalition, says: “Treatments for some NTDs cost as little as US$0.50 per person, yet can deliver a 30 per cent return on investment. Despite this less than one per cent of development aid is allocated to these diseases.

“Without additional commitments, the WHO’s Roadmap for control, and elimination where possible, will be unachievable. It is therefore encouraging to see the pharmaceutical industry increasing their commitments. Today’s promises, spearheaded by the Bill & Melinda Gates Foundation, and last week’s funding announcement by the UK government, are a defining moment, setting us on a powerful course towards the elimination of these diseases.

“The UK Coalition against NTDs will collaborate with other NGOs, governments, multilaterals, academia and private sector leaders to ensure that the commitments made today become a reality for more than one billion people affected.”

Notes to editors:
About the Event
The UK Coalition against NTDs is co-hosting, with the Bill & Melinda Gates Foundation, an afternoon discussion at the London Royal College of Physicians on 30 January 2012 on the World Health Organisation’s initiative to eliminate NTDs. The in-depth session looks at how new and better partnerships can help accelerate improvements in health and development for those living in the world’s poorest countries.

The Coalition is inclusive of organisations that are interested in NTDs. Founding members are:

Posted by Sightsavers at 15:59